I love technology. I just love it. And I love computers, cellphones, PDA’s, digital camera’s and other geek toys. The only thing is… I don’t have them!!! I used to have some fine toys, but they have been stolen some months ago. 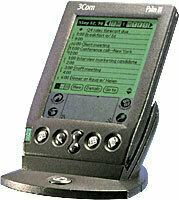 My biggest proud and useful gadget was my Palm III PDA, shown above. It contained my agenda, addresses of friends, family and clients, books to read at lost moments, games and passwords (encrypted of course!). Without realising it, I used my Palm daily, and was very happy with it. But… no Palm at the moment! 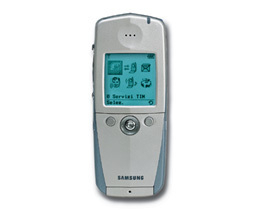 The other gadget I owned was a Samsung SGH-N400 cellphone. I specially liked the design of this phone (by Pininfarina). But is was easy to use and had all the functions I need (vibration, WAP, small size, …). But… no cellphone at the moment!

I do have some computers, three in total. It is not the quality of them but the amount that make them geek toys. My desktop computer is the most advanced of the three, with a Cyrix P-133+ processor and 48Mb of memory. Yes, I know it is not that impressive. But after I reinstalled everything lately it runs faster that the mega computer I use at work. I did keep some room on the harddisk to install Linux to have even more pleasure. But… no Linux at the moment!

You might think that I must be a sad geek without any toys, but that is certainly not the case. I don’t have any toys, because I am looking around to decide what toys I am going to buy. Alright, I could go into a shop and buy the latest and the greates phone, PDA and computer, but that is gonna cost me an awful lot of money.

First of all I decided that I don’t need a fancy cellphone. If I have time I will buy a prepaid number this weekend, and I will probably start using a second hand phone. For the moment that will be enough, since I don’t phone a lot and neither plan to use any other functions.

I will also keep on using my old computer. It is fast enough, and with a little bit of extra memory, a wireless connection to the ADSL router and Linux installed I sure will have lots of pleasure of it.

That leaves me without PDA. Palm recently released a new model, the Zire 71, which kicks ass! It has a built-in camera, so it gives me two toys for the price of one. The only problem is the price, which is around €300. I will have to think it over a few more times, but I am afraid that I am going to buy it…