After the basic installation of MuLinux earlier this week, I have been looking around and expanding the system during the last days.

The whole thing is mature and really well though out, with lots of user-friendly scripts and help files.

To save a configuration as default simply type setup -s. To load a configured module MOD use setup -r MOD and to force reconfiguration use setup -f MOD. Setup also can be used without parameters, to start the setup menu. This menu shows all available add-ons and modules and lets you configure them from one screen. Besides setup, there are a lot more scripts. Even well known UNIX command like grep are implemented as a script. I was really impressed!

After looking around and playing with all options, I decided that it was time to expand the possibilities of my system. So it took the WKS (workstation), SRV (server) and X11 (X window system) add-on floppies and installed them from the setup menu.

At this moment I had an incredible amount of features, using only 4 diskettes. I played around a little bit again, and started configuring xf86 to have a graphical interface.

Usually this is the most difficult part to configure, since you need to know a lot of parameters from your system (OK, not in the modern Linux systems), but MuLinux was perfectly able to configure X using its probe feature. After 5 minutes I had a screen like this: 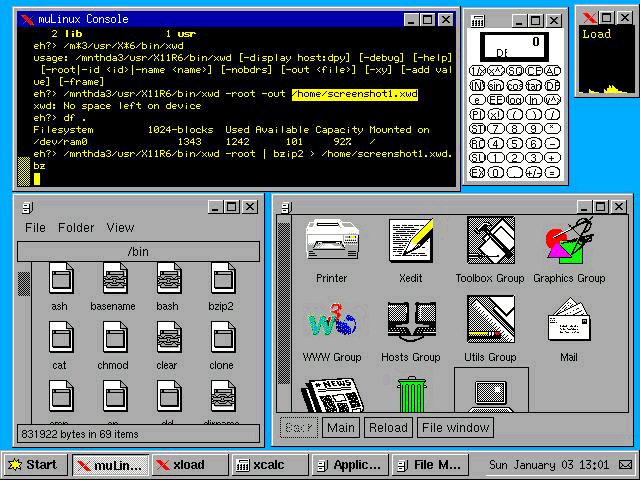 Not bad, isn’t is? For next week, I’m planning to get Internet connection. First I want to put the PCMCIA modem from my Toshiba into the MuLinux machine (which is by then an IPC Porta-PC P5E-486/DSTN) and get it connected to Internet. Furthermore I want to try to connect it to another computer using a LapLink cable. And maybe, I’ll download some more add-ons (GCC TCL TEX PERL EMU JVM NS1 NS2).

I haven’t finished playing yet!